Gangster Weapons of the Past

In the early 1900’s French gangsters used a weapon called an Apache Revolver that functioned as a revolver, a knife and brass knuckles. The Apache operates on the principle of a pepperbox revolver using a pinfire cartridge and incorporates a fold-over knuckle duster forming the grip and also a rudimentary foldout, dual-edged knife. Due to the lack of a barrel, the revolver’s effective range is very limited, but since all of its component parts can be folded inward towards the cylinder, it was easily concealable inside a pocket.
It was common to leave an empty chamber with no cartridge under the hammer to prevent shooting oneself while having it concealed in a pocket or bag, as the weapon has no trigger guard or safety. This weapon is not able to be aimed precisely because of its lack of front and rear sights. Despite its limited potential, the revolver proved deadly at extremely close range. For reloading, the cartridge cylinder must be removed and replaced with a full one.

A 9×19mm Parabellum revolver of similar design (but no official designation) was allegedly used by British Commandos during World War II, though exact statistics about production numbers and technical details have as yet remained undisclosed to the public.

Video Transcript:
[Intro music]
Host: “Hi guys, thanks for tuning in to another video on ForgottenWeapons.com. I’m Ian, I’m here today at the Rock Island Auction House taking a look at some of the guns coming up for sale in our February 2015 regional auction. One of the ones that I figure we should take a look at is this, Dolne or Apache knuckle-duster revolver. We’ve looked at a bunch of this era of pocket defensive pistols, but we haven’t seen this one before, so they have a good example in the auction, I figured I should pull it out.
What makes these a little bit different is, they’re actually three weapons all in one. So, if I go to put this back together here, it is actually a set of brass knuckles, it is also a dagger right there, to be used with knuckles, and a folding-trigger revolver. There’s actually a lot of neat, intricate stuff going on in this gun, so why don’t I take the camera back here, and let’s take a closer look.

Alright, so a Frenchman by the name of Louis Dolne patented this device in 1869, they were manufactured by a number of different companies in Europe through until about the turn of the century, about 1900. At that point of course they’d been superceded by more typical modern pistols. So, let’s start with this as a knuckle-duster.You can see, obviously, it has space for four fingers.
It also, interestingly, has this little hole in one last finger, and a little pin right here on the frame, so that that gives you a solid position to lock the knuckles into the frame so that they don’t bend if you don’t hit something. The top of the frame here is curved, that’s not an accident, that’s intentional, so that it fits nicely into the palm of the hand like so. For what it’s worth, I find that these knuckle holes are just a hair too small for my fingers.
I can get the thing onto my main row of knuckles, but it’s kinda tricky to get it back off, so I’m not gonna do that on camera. Now the next weapon involved in this is this little flamenbere-style dagger. It has a locking latch right here, so I push this button down, it allows it to go back in. You can see right there, the locking latch pops up and the whole thing is held on by a screw. It is kinda wobbly, but if you tighten it down it’d probably work at least once. Now some people look at this and assume it’s supposed to be some kind of a bayonet-pistol. I’m pretty sure that the knife is actually intended to be used with the knuckles. It’s certainly a lot more practical this way. When the knife is not in use it has a little latch here, a cover that holds the point of the blade.
The blade by the way is not sharp. The point is pointy, but the edge is not sharpened. So there’s the knife blade. And the last element to this is the revolver. So we have a latch here, spring-loaded, and the knuckles lock into the frame like this, the trigger folds down, and we have a functional revolver. I was a little surprised while handling this just how good of a grip you actually get from these brass knuckles. It works better than I was expecting, and frankly better than most other pocket-pistols of this sort of this era. The revolver itself has no barrel, it’s just a cylender. It holds six cartredges. This particular one is a five-milimeter pinfire. That was probably the most common, they were also made in seven-milimeter pinfire. Unfortunately on this one, the cylendar hand is broken, so it doesn’t properly rotate the cylendar. But you can see we’ve got our hammer there, there’s no way to manually cock this, it’s double-action only, and being pinfire, this simply drops down onto the pin primer extending out from the cartredge. There is no rebounding safety or half-cock, so if you were going to carry this, you’d want to carry it on an empty chamber, You’d carry five loaded rounds and one empty. In order to load it or unload it, what you’d do is rotate this little pin around -you can see there’s a lot of little fiddly stuff going on on this guy- anyway, we rotate that around, and then we can open up our cylendar access pin here. Once this pin comes out, you can see it has this little retention spring on it there, and the cylendar just drops out. So there’s our cylendar. No rifling, just six long chambers. There’s a hole in the front of the frame that you fire through, and you can see the hand right here, and the spring that’s supposed to push it out to engage with this ratchet on the back of the cylendar, that little spring is broken. So. That’s why it doesn’t work. Then at the base of the cylendar here we have the lock, so that prevents the cylendar from rotating while you are actually firing.

Now, the access pin would act as your cartredge ejector. It’s got the spring, so it’s right, but push that in. Eject each cartredge, one after the other, then you would manually re-load them all, put the cylendar back in, put the access pin in, rotate it down, rotate this up to lock it in place, and then you’re ready to go. you can see this right here is the main spring for the trigger mechanism, that’s what’s being acted upon when I pull the trigger, and that’s about it mechanically for these guys. 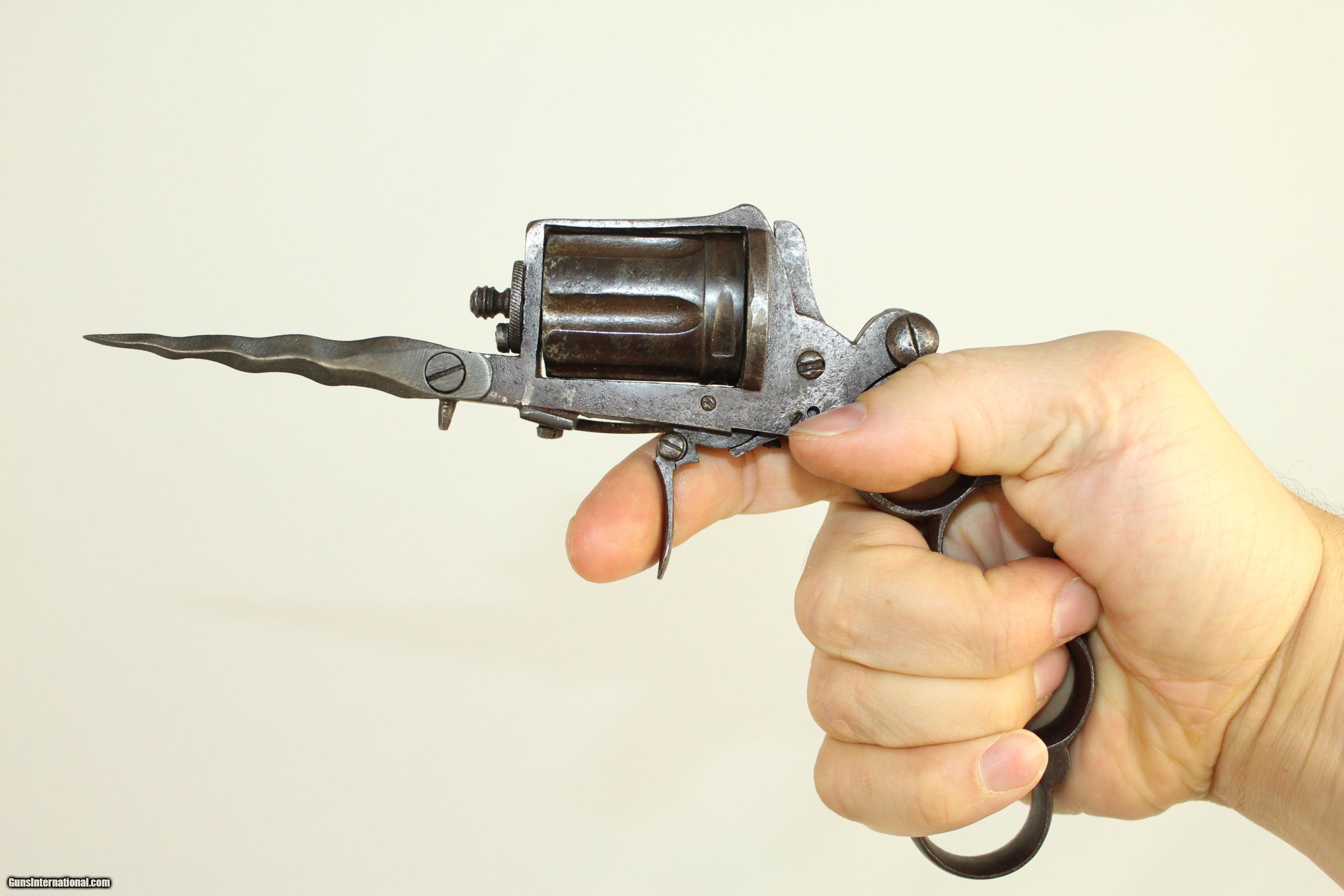 I mentioned at the beginning that they are often called Apache Pistols, I can’t quite vouch for the veracity of that exact story, but the idea is: These were used by gangs of French -specifically Parisian- roughs and no-goodnicks, Gangsters basically, who got the name ‘Apache’ allegedly for being renowned as being as cruel and violent as the American Apaches. Whether that’s absolutely true, I couldn’t say for sure, but it makes for an interesting story. And apparently this sort of pistol was either a trademark of theirs, or simply something that just became associated with them. I don’t think they were typically called Apache pistols at the time, but it’s a name that they’ve gotten since.

So here are the markings on the front of the frame. You can see there’s a serial number, you can see the word ‘Dolne’, that’s the inventor, then there’s ‘privet'(?), that’s a patent notation. That’s a Dolne-patent gun. We don’t know exactly who manufactured this one. There is a little teeny mark on the frame right there. That’s about it. The majority of these were brass, there were some made with iron frames, the style of the blade varies between different examples, as do the style of the knuckles. Of course, being made by multiple companies, you had a lot of different designs. The only real commonality is mechanically, how they function.

Well, thanks for watching, guys, I hope you enjoyed the video, hope you learned something about another one of these interesting eighteen-hundreds defensive weapons. And if you’d like to buy this and add it to your own collection, you certainly can, this being an auction house it is up for sale. This is lot 1117, you can see it below, there’s a link in the description below to rock island’s catalog page, you can take a look at all of its pictures and place a bid on it. It’s in a lot with ther interesting old revolvers, so definitely something to take a look at.