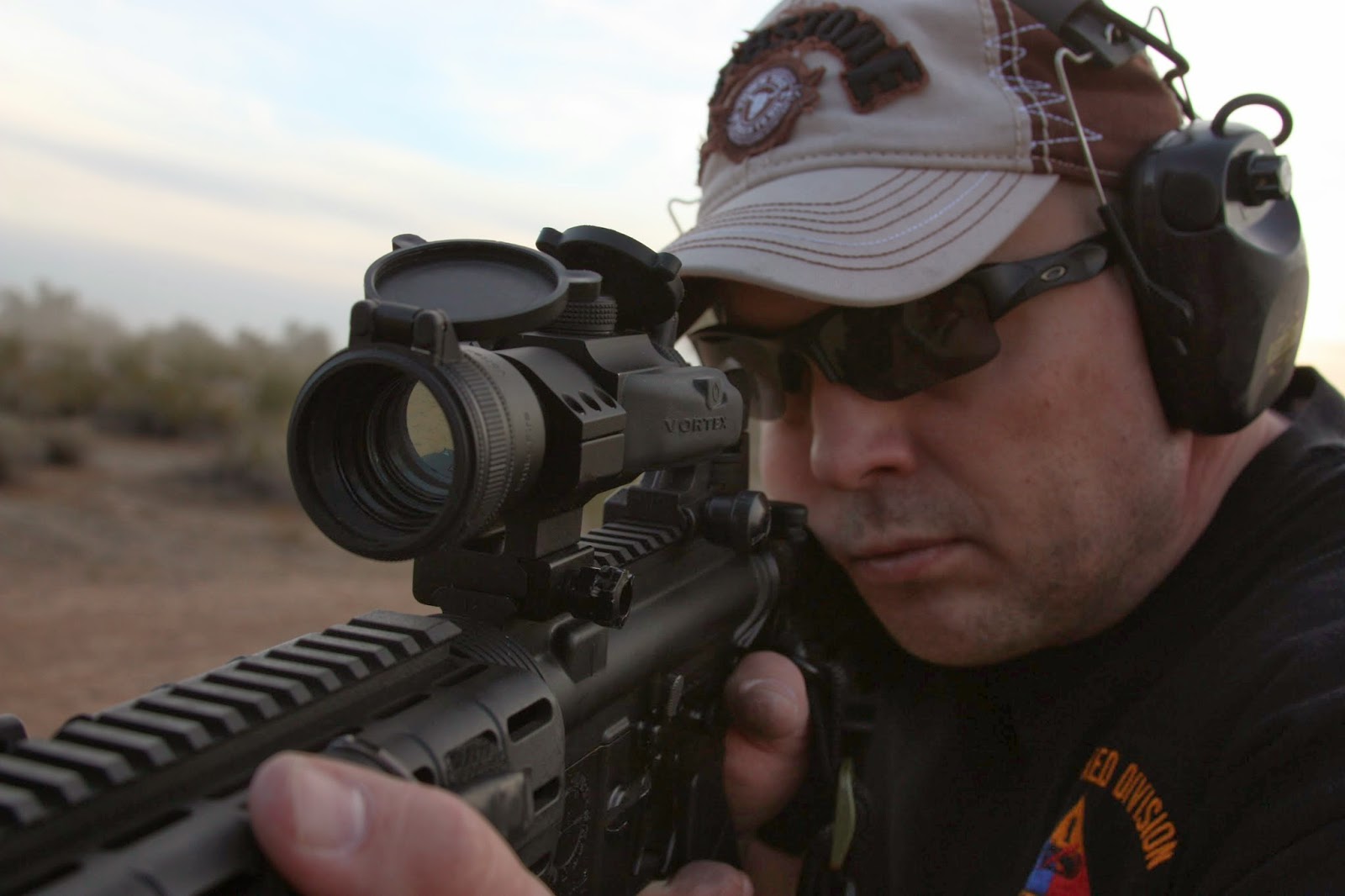 Having recently completed a budget 5.56 AR build, I found myself in the market for budget optics to place on the newly completed rifle. My demands were simple. I wanted a 1x magnification in either a holographic or red dot optic that was well constructed and held zero with reasonable reliability. I don’t think that was to tall of an order to fill. Having built the rifle for under $700, I did not want to spend even close to that amount to equip it with optics. In my quest for a quality budget optic I came across a “deal” on a Sightmark holographic sight. At first, it did not seem to be a bad sight. On an indoor range it held zero reasonably well and appeared to be relatively well constructed for the limited amount of money I spent on it. However, once I took it to an outdoor range and into full sunlight, its drawbacks were readily apparent as the reticle was not visible, even on the brightest setting. Although a cool little sight, that dog just wouldn’t hunt. So it was back to the proverbial drawing board and my quest continued. Enter the Vortex Strikefire. 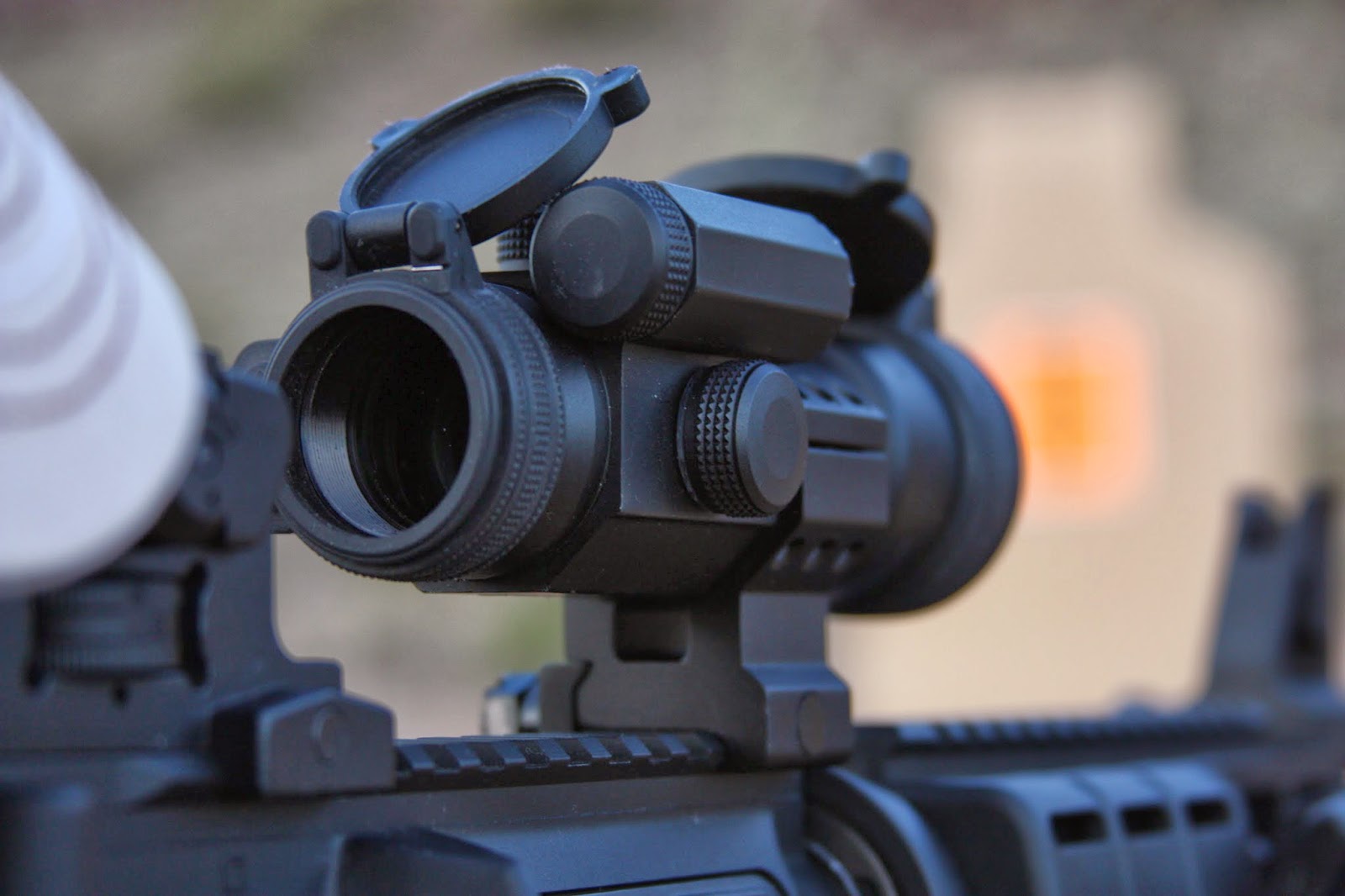 A Middleton, Wisconsin based company; Vortex Optics has been in the optics game since 2004. They manufacture everything from binoculars, to spotting scopes, to rifle optics and assorted optics related accessories. In the past 10 years they have managed to build themselves a reputation of putting out some quality optics at respectable prices. Their warranty service is second to none, being one of the only companies in the industry to back their products with an unlimited, no questions asked, fully transferable, no card to file, lifetime warranty. Vortex refers to it as their VIP warranty, very important promise.

Magnification: 1 x
Objective Lens Diameter: 30 mm
Eye Relief: Unlimited
Tube Size: 30 mm
Dot Size: 4 MOA
Adjustment Graduation: 1/2 MOA / click, 25 MOA / rotation
Max Elevation Adjustment: 100 MOA
Max Windage Adjustment: 100 MOA
Parallax Setting: Parallax free past 50 yards
Length: 6.1 inches
Weight: 7.2 ounces
The Strikefire is an Aimpoint style red/green dot sight. With an operating temperature rated from -22 to +140 degrees Fahrenheit, the Strikefire is manufactured as a 1x unlimited eye relief dot optic with fully multi-coated lenses, 30mm one piece nitrogen purged tube construction and is boasted as being waterproof, fog proof, shock proof and has an NVG compatible reticle setting. Vortex lists the Strikefire as being parallax free past 50 yards. The Strikefire is powered by a single standard CR2 battery and comes standard with flip up style lens caps, a 3x screw on sight magnifier and either a low or high 30mm tactical ring. It is manufactured in either red dot only, or red/green switchable.
The Strikefire appeared on paper to meet my needs. I took the plunge and placed the order. Once I recieved it via UPS, to tell you the truth, I was rather pleased with it upfront. It made a decent first impression. For less than $200.00 I seem to have found a very good budget optic for a budget built rifle. Opening the box I was immediately impressed with the construction of the Strikefire. Having some experience with Aimpoints, EO-Techs and a couple of other high end holographic and red dot optics, the Vortex seemed, at least visually, to measure up in terms of build quality. The glass was bright and appeared to be relatively very clear. The dot reticle was well defined and very bright and adjusts via + and – buttons on the left side of the optic. Admittedly, neither the glass nor the clarity of the reticle was as good as they are on an Aimpoint, but I didn’t pay $500 for the Strikefire either. I was not expecting Aimpoint quality for the price I paid but the Strikefire looked to be a very good value for the money. 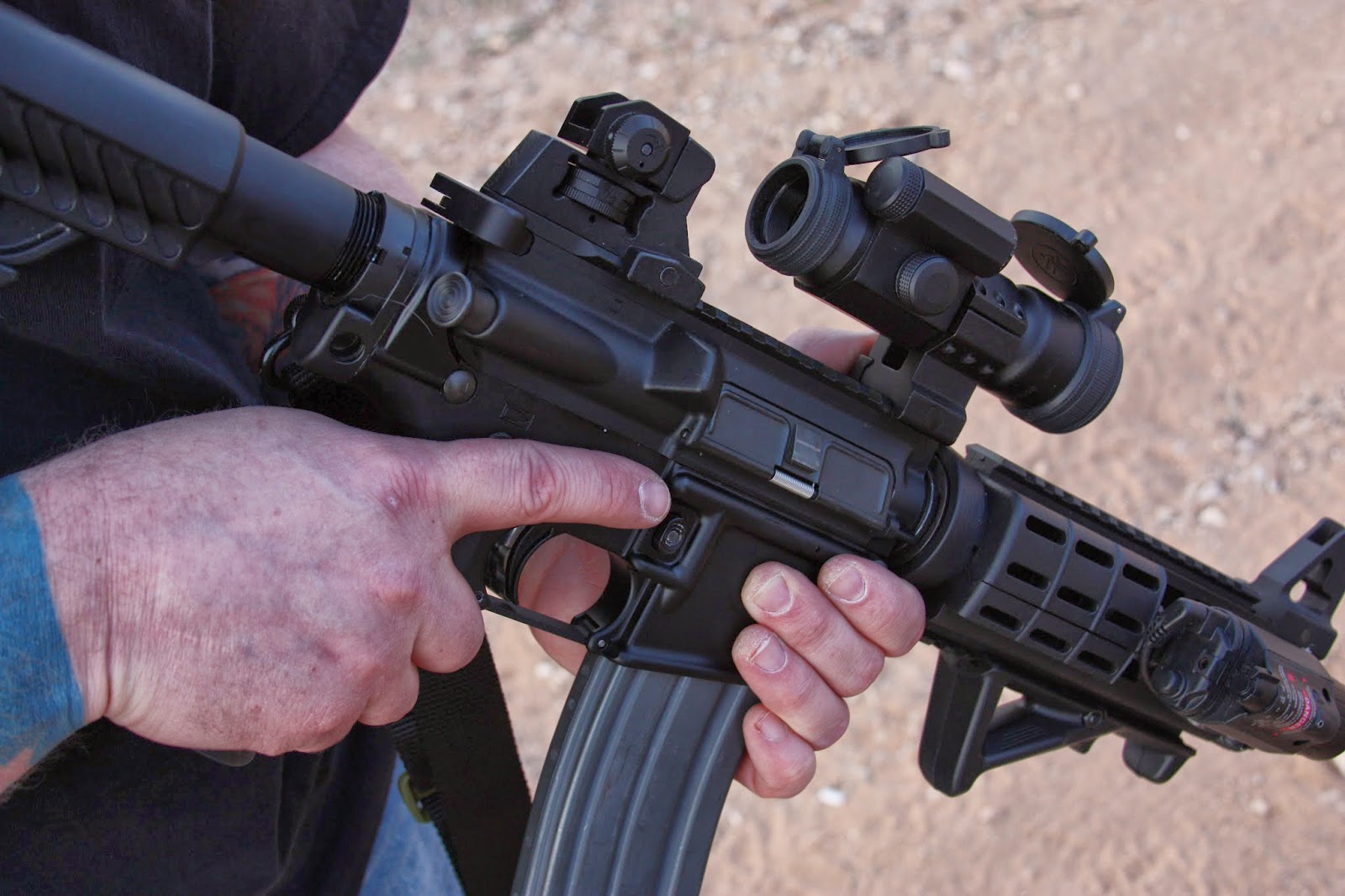 One thing that did strike me as odd immediately upon opening the box was the inclusion of a strangely designed magnifier. Vortex opted to include this with the Strikefire and it is applied by screwing it into the rear aperture of the optic itself. After a few minutes of playing with it, I found it to be rather useless. It greatly restricts the field of view when applied. I would say toss it, but I elected to keep in in my B.O.B. as it could conceivably be utilized in a pinch to start a fire using the sun. If you’re considering the Strikefire and you require the use of a magnifier, it would behoove you to invest in separate magnification device. Vortex offers in its product line, a flip-side 3x magnifier (the VMX-3T) that would undoubtedly be a better option.
I also immediately took notice of the included lens covers. They were similar to the flip up style found on an Aimpoint with one major caveat; they were very difficult to snap closed. Although I appreciated their inclusion, Vortex can undoubtedly make an improvement here. 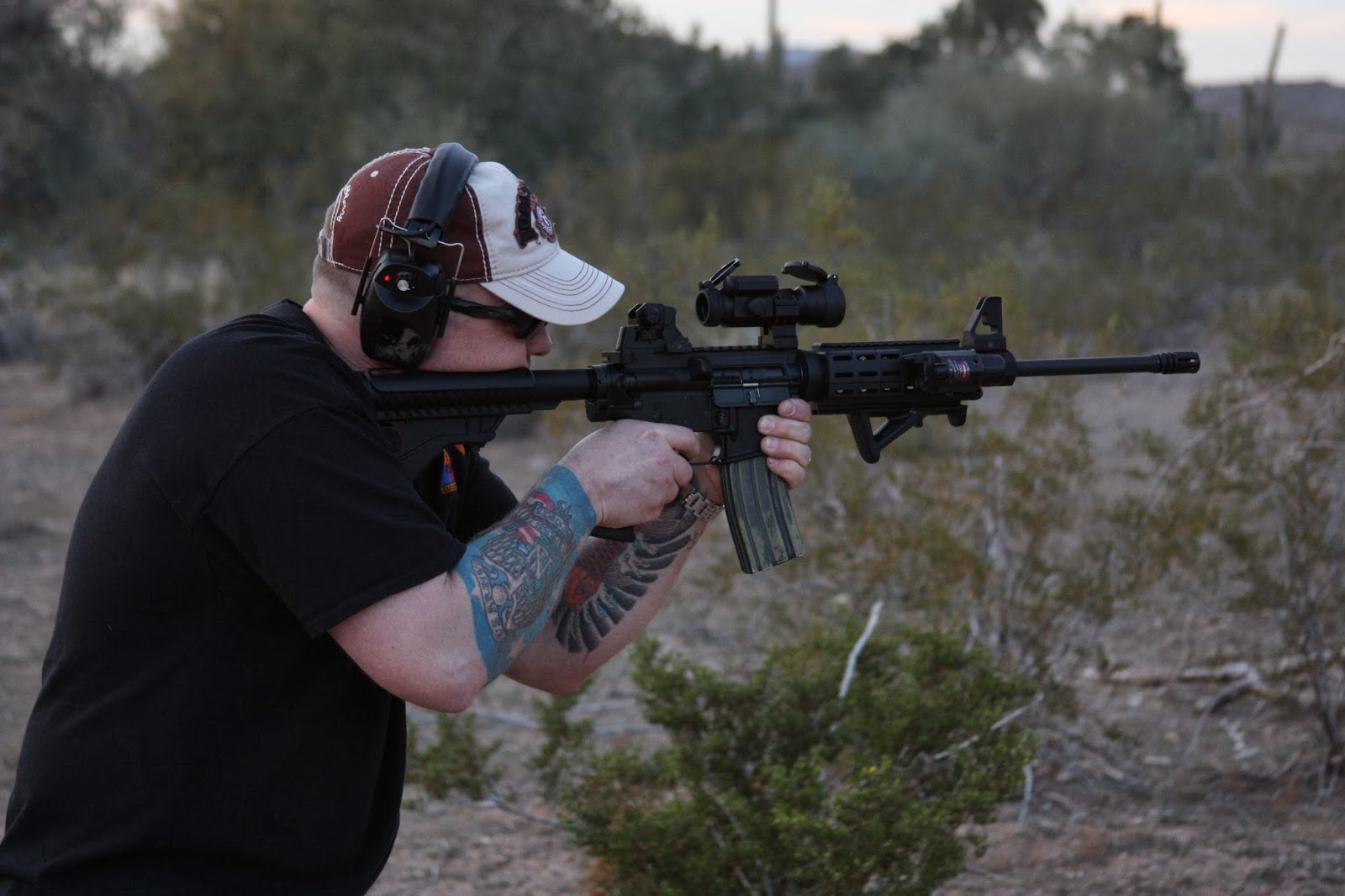 I found the Strikefire very easy to mount on my rifle’s flat top receiver utilizing the included high profile 30mm absolute co-witness tactical ring that utilizes a ½” slotted nut as opposed to a quick release lever. The ring measured 1.46 inches from base to center. Once mounted on the rifle, I found that it was very easy to co-witness my Magpul BUIS with the field of view through the optic’s 30mm tube being ideal for the task. Utilizing a bore sight I was able to get the first three rounds in nice group on the paper at a distance of 50 meters immediately after installing the optic. The first group was a little low and to the left. The Strikefire was extremely easy to dial in from there. The windage and elevation screws yield ½ MOA per very positive click. Once zeroed I was able to consistently put three shot groups under a Quarter Dollar at 50 meters from a bench. Following the successful zeroing session, I ran the Strikefire through its paces in a reflexive fire style exercise. I found the reticle very easy to acquire in both partial shade and full sunlight and was able to put rounds consistently on steel, right where I wanted them at varying distances under 75 meters while shooting on the move. That afternoon I ran 250 rounds through my rifle using the Strikefire and it functioned flawlessly. It held zero without a hiccup. My first range experience with the Strikefire was very satisfying. I went home feeling very satisfied with my purchase. 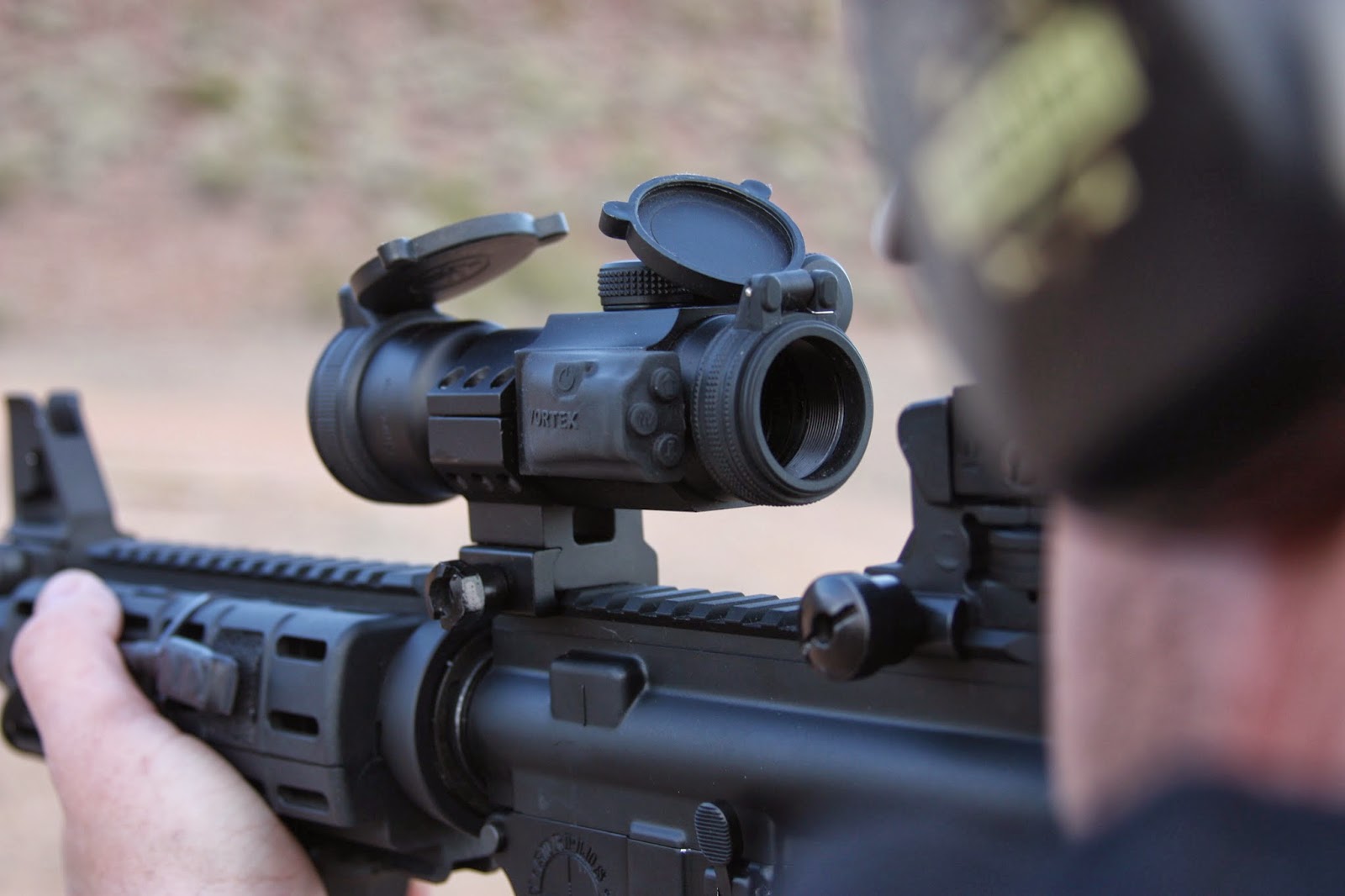 Another thing I did notice that perhaps Vortex could improve upon is the location of the power switch on the Strikefire. Its location lends itself to accidental activation as I discovered when I arrived home from the range. When I removed the rifle from its case for cleaning, the reticle was active. I had powered it down when placing the rifle in its case upon leaving the range. This could lead to inadvertent draining of the battery and an unexpectedly dead optic.
My second range experience with the Stikefire involved a great deal of shooting on the move, running between cover, and shooting from various positions. At one point during this range exercise, I slipped and the rifle sustained a good solid hit on the ground at my side. The rifle held up just fine but I immediately wondered about the Strikefire. Was it durable? At first it seemed no worse for ware, still functioning just fine for the first magazine or two after the fall and it seemed to hold zero. I was impressed. However, by the third magazine following the fall, the reticle would not remain illuminated. With the recoil of each round, the unit would turn off. It would power back up, but as soon as I pulled the trigger on another round it would go dark. I was now beginning to second guess my purchase. It was time to test Vortex on their much ballyhooed VIP warranty. The following week I sent an email to Vortex describing the problem. Sure enough, without hassle the response was “send it in and we’ll either fix it, or replace it.” I put the Strikefire back into its box and shipped it off to Vortex. Exactly two weeks later I received my Strikefire with a detailed explanation of the malfunction and the steps taken to repair it. Vortex even covered the cost of return shipping. I was impressed with their customer service. Vortex was very easy to work with, attentive and timely. It seems the VIP is indeed taken very seriously by this company. 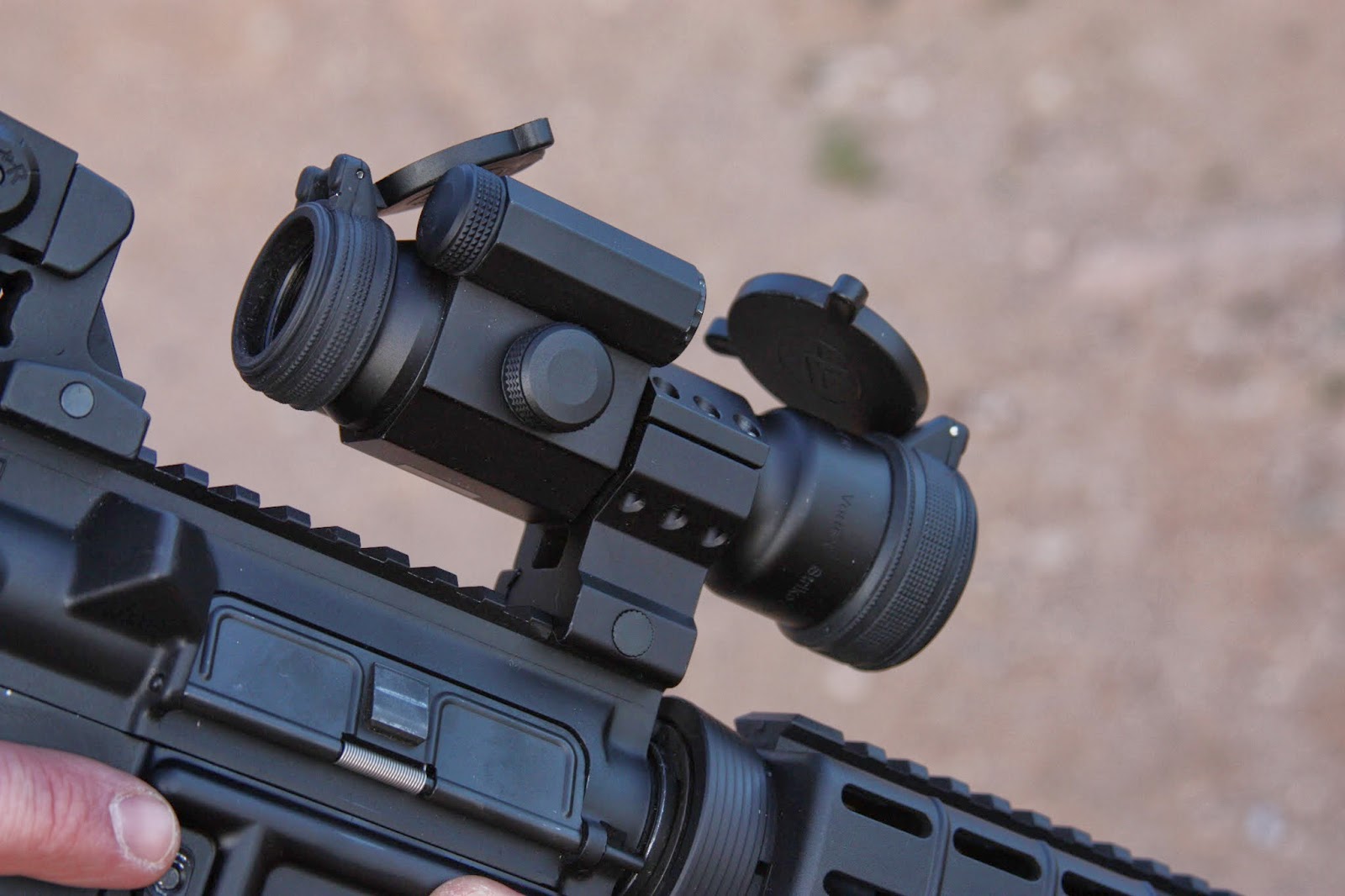 I function checked the Strikefire and it appeared to function like new. I re-installed it on my rifle and after a quick bore sighting, I was off for a quick trip to the range. The Strikefire again zeroed like a champ and the problem with the power reticle was resolved.

I have owned the Strikefire for approximately just under 2 years now and it has held zero and functioned like a champ after around 800 rounds of good strong use. I have even had it out in the rain on one trip and the unit held up without any fogging of the lenses. All in all I would probably rate the Strikefire strong 4/5. For less than $200, the Strikefire is a good value and the transferable lifetime no questions asked warranty is a boon backed by stellar after the sale customer service from Vortex. The Strikefire’s quality, in this shooter’s opinion, is on par with its price. It’s not a cheap toy like a lot of the low end sights on the market but it’s not a high end Aimpoint or EOtech either. If you are in the market for a very decent middle of the road budget 1x red dot optic, check out the Vortex Strikefire. It’s not perfect, but it doesn’t break the bank and it’ll most assuredly get the job done. Take the plunge, and it’s my feeling you will not be disappointed.

Reprinted from Gear, Guns and Knives