The Long, So-far Fruitless Quest To Build A Battle Scattergun

The shotgun is an iconic weapon most often associated with the pump-action badassery of action films and video games. While awesome in fiction, its use in the real world is limited to close combat and breaching doors, not to mention bird and deer hunting. Despite its drawbacks, a mystique surrounds the weapon, and soldiers as well as law enforcement officers still use them. The draw of the gun is so powerful that the Pentagon has spent several decades and millions of dollars to improve on the basic design.

In the late 1960s, the military and private companies started tinkering with prototypes for a super shotgun. Three decades later, questions about the weapon’s purpose and practicality on the battlefield doomed the project. The proposed super shotguns were revolutionary, but perhaps to a fault.

Since World War I, scatterguns have been a fixture in American military arsenals. In the trenches, where fighting could be brutal and often hand-to-hand, the short-range idea wasn’t a problem. In World War II, individual soldiers or Marines, especially in the Pacific, carried shotguns to help clear out bunkers or break up ambushes. The same situation persisted in both Korea and Vietnam, but even throughout these eras, the US Army and Marine Corps mostly issued the weapons to military police officers on guard duty.

“The usefulness of the shotgun in combat has long been the subject of some controversy,” Carroll Childers wrote in the January-February 1981 issue of Infantry magazine. “Unfortunately, a great deal of romanticism about its use prevails.”

At the time, Childers was an engineer at the Naval Surface Warfare Center in Dahlgren, Va., as well as an officer in the Virginia Army National Guard. In 1969, Childers started work on what he hoped would be a radical new design dubbed the special operations weapon, or SOW. Childers based his initial concept on the needs of and feedback from Navy SEAL teams and Marine reconnaissance troops. The shotgun’s features made it an attractive weapon for specialized units that often had very specific requirements.

During the Vietnam War, Marines complained about how contemporary scatterguns needed to be constantly reloaded during firefights, couldn’t reliably hit anything — let alone kill — at even modest ranges and couldn’t stand up to the abuse of a patrol, according to Childers. The SOW prototype looked fearsome and crude, but it solved many of these key problems. The gun was fully automatic and fed from a 10-round, detachable magazine. Unlike the fixed tubular designs on most shotguns of the day, a shooter with an SOW wouldn’t need to reload one shell at a time, and they could swap out ammunition types — pellets, solid slugs and more  —  with relative ease. Childers’ gun was also compact compared to the other types of firearms troops took into the Vietnamese jungle, at least in length. With its simple stock folded  —  or removed  —  the SOW was shorter than the pump-action Remington Model 870. 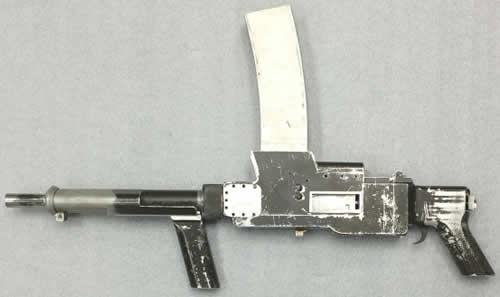 Three years after the project got under way, Dahlgren patented the SOW. That same year, Maxwell Atchisson, a former Marine and private weapons designer, introduced his Atchisson Assault Shotgun. Atchisson’s original weapon looked like an M-16 on steroids, but was clearly influenced by the same background as the SOW, and had a special recoil-absorbing system built in to make it less of a beast to shoot.

When Washington signed the Paris Peace Accords with North Vietnam and began pulling troops out of Southeast Asia, any interest in either design evaporated. In the years that followed, Pentagon budgets shrank across the board.

Unlike many other projects, the post-Vietnam drawdowns couldn’t kill the SOW concept. By the end of the decade, the Pentagon had started up an overarching effort to cook up new guns across the services called the Joint Service Small Arms Program, or JSSAP. The new office declared that there was a need for an improved combat shotgun suited for military purposes.

“While the greatest threat is represented by Warsaw Pact forces in Europe, there is a growing belief that the most likely US military engagement will again involve third-world countries,” a May 1979 Pentagon memo stated. “Current shotguns are converted commercial weapons adopted under the pressure of wartime emergencies.”

If another small conflict were to break out, American troops would be in the exact same predicament they had been in Vietnam. The Pentagon felt soldiers and Marines fighting in dense wilderness or urban areas needed better guns.

The work at Dahlgren caught the eye of the JSSAP. With Childers’ experience, the Navy led the development of RHINO — repeating, handheld, improved, non-rifled ordnance.

“I wanted to keep the name SOW,  but that, being a female pig, never gained the support of those conferring program titles,” Childers wrote in a letter to Benjamin Schemmer in 1982. “RHINO was a little more catchy.” Schemmer, editor of Armed Forces Journal, had just published an article on the current state of JSSAP’s project. Childers felt the piece had fundamentally misunderstood and misrepresented
his work.

The Pentagon had hoped the end result would be a revolutionary gun, not limited like existing shotguns, but the JSSAP-sponsored plans called not just for a new gun, but new projectiles to go with it. The RHINO would spit out pellets, high-explosive grenades, signal flares, tear gas bombs and more. Troops would use the weapon for house-to-house searches, combat and standing watch.

Tank crews would trade in their old WWII-era submachine guns for these new weapons. Even better, the resulting design could replace existing survival rifles, but plans for such a broad and sweeping firearm would run into trouble. Two years after JSSAP’s memo got the RHINO project going, the office renamed it the Multipurpose Individual Weapon System. A year after that decision, the Pentagon changed the moniker again to Combat Shotgun. Each shift reflected an internal debate about just what the new guns were actually supposed to do.

By 1982, the Naval Surface Warfare Center in Crane, Ind., had taken over what was by then known as the Close Assault Weapon System, or CAWS. Much of the original logic for the new weapon was getting lost along the way. The CAWS requirements had largely dispensed with plans for a multi-purpose weapon. Ammunition development focused on trying to build pellet-filled shells that would be accurate at longer ranges. These new rounds would make a troop armed with the shotgun less of a liability to his comrades on a traditional battlefield, but no one had ever really expected a soldier to use the weapon in that manner anyway. “I certainly wouldn’t want an automatic shotgun,” retired Army Col. Charles Beckwith, founder of Delta Force, told Schemmer in an interview. “I’d have to have four boys along just to carry the ammunition!”

Perhaps worst of all, the whole thing was becoming a political nightmare for everyone involved. “It is important that JSSAP show some development success [on CAWS] or lose credibility as a research and development vehicle,” Ray Thorkildsen, an ordnance expert in the Office of the Secretary of Defense, wrote the same year. Thorkildsen wanted Crane to hurry up and build something. With Childers’ in-house project scrapped, private companies were eager to scoop up the now open contract.

The AAI Corporation and Heckler & Koch took the lead. Like Atchisson’s shotgun, AAI’s prototype looked and handled like a beefed-up M-16. H&K offered a more radical “bullpup” design, which had its magazine all the way in the rear. Pan Associates, a much smaller company, planned to offer an even more futuristic-looking gun called the Jackhammer, but the Pentagon demanded all manufacturers have a line of specialty ammo ready to go with their submissions.

Despite a protest to the Government Accountability Office that held up the contract, Pan gave up trying to meet the goal. Atchisson also declined. A year after Thorkildsen sent his memo, H&K finally won out. The German gun manufacturer brought in Olin to design the new all-metal shells full of shot made from a tungsten alloy.

For the next three years, the prototypes were put through their paces. The new buckshot was indeed more accurate and deadly, historian Kevin Dockery notes in his book Special Warfare Special Weapons.

But with the project’s supporters increasingly unable to explain who would use the weapons or why, the project finally came to a close. More than a decade later, JSSAP chose a conventional semiautomatic as the Pentagon’s new scattergun, but the Benelli M-1014 still hasn’t completely replaced aging pump guns.

Four years ago, the Army started buying shotguns that fit underneath standard M-4 carbines. These M-26 Modular Accessory Shotgun Systems give troops an option for breaking down doors without having to lug a whole separate weapon around. Still, private industry has refused to give up on the idea of a fully automatic shotgun. Over the years, many companies purchased the rights to Atchisson’s design. Daewoo in South Korea built a derivative of that shotgun, too, but without real interest from the Pentagon or any other military around the world, the various guns have spent far more time in Hollywood productions and video games than in actual combat. AmSJ