A break-action weapon, the Pistola con Caricato features three barrels, complimented by a very high capacity 18-shot cylinder, which is reloaded via two-piece moon clip-type loading devices. They sandwich the 18 rounds between a holding plate and a firing access plate, through which the firing pins strike the cartridges. The weapon has five operational settings, and the selector allows the shooter to choose which firing pin and barrel would be used to fire the gun. It also has the option to fire from all three barrels at once with one pull of the trigger. It also features a mechanical safety that prevents the hammer from hitting any of the firing pins. 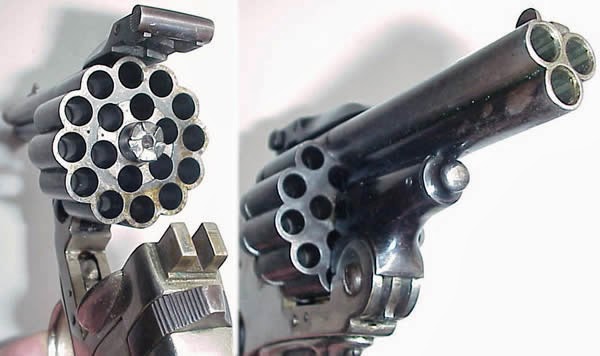 The Con Caricato had four firing settings and a safety controlled via selector switch on the left of the revolver’s frame. Each setting controlled one of the three barrels, the fourth setting reserved for those instances where a user would say “to hell with it” and fire all three barrels simultaneously. Enormous, two-piece moonclips facilitated faster reloads, assuming the user preferred keeping their revolver set to triple-fire.

Ammo It uses the low-powered, semi-rimmed 6.35×16mm caliber round, which is traditional for light pocket guns.
The .25 ACP is a traditional favorite for pocket guns, and particularly for inexpensive “Saturday-night Specials,” since its pressures are low enough to pose little risk to even the weakest metal.
It’s considered the lowest-powered standard cartridge still in manufacture, with the exception of the .22 short. Of course, firing three of them at a time helps to offset their anemic nature.

Is it Good Enough to Use? Plenty of people hate on the .25 ACP, claiming its anemic power makes it worthless as a self-defense cartridge. To that, I simply say, I’ve never met anyone who’s volunteered to stroll downrange and catch one, let alone 18 of them.

Here’s a similar one from Forgotten Weapon, Ian McCallom goes over a 20-shot Pinfire Revolver, which only has 2 barrels.