A while back American Sniper movie was a big hit on the silver screen, we checked in with three former Marine Corps snipers for their thoughts on the profession, how it changed them, America’s deadliest marksman Chris Kyle, and advice for aspiring snipers.

Trey Dominick Joined USMC in 2006; deployed to Afghanistan and twice to Iraq as an infantry assaultman and scout sniper; following honorable discharge, worked for U.S. Embassy in Iraq as a designated defense marksman; currently works for Iron Protection Group in Colorado.

D BRETEAU (former AmSJ Editor) What is your overall insight into the sniper profession, and how did it change you, if at all?

JASON MANN Other than being a proud father to four children, nothing makes me prouder than being able to say I am a Marine and a Marine scout sniper.

CAYLEN WOJCIK My definition of a Marine scout sniper is a Marine highly skilled in fieldcraft and marksmanship who delivers long-range precision fire on selected targets from concealed positions in support of combat operations. Shooting is 10 percent of your purpose, but when you’re called upon to utilize that skill, it becomes 100 percent of your focus. Snipers are a part of a brotherhood, and that brotherhood is a level of selflessness that most will never truly understand. Discipline, self-reliance, teamwork, perseverance and fortitude are just a few things I believe I took with me that have been a great benefit. 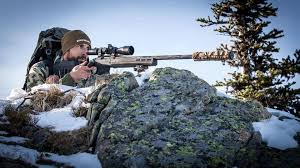 TREY DOMINICK It helped me become stronger in stressful situations. I have
learned to take a step back in order to make logical decisions. This process can be used in any aspect of your life.

DB Did you ever meet Chris Kyle?

JM I met Chris at SHOT Show several years ago. I just shook his hand and said hello.

DB Have you seen American Sniper or read the book, and if so, what were your thoughts on the topic and authenticity?

TD I have read the book twice. I thought it portrayed Chris Kyle’s story very well. I can’t really touch on the authenticity of his story, but from everything I have read about his story and my personal experience as a sniper, I cannot find anything I feel is widely exaggerated. The thing that troubles me most is how there are many people saying his stories are false now that he has passed away.

JM I have not seen the movie. I am apprehensive because another movie
representing Marine scout snipers was horribly done and reflected poorly on us. I have read the book. For many years the roles of snipers were rarely spoken of and there weren’t many books on the subject. But since 9/11 there has been a litany, and most, in my opinion, attempt to glamorize and elevate, which I do not appreciate. The focus should not be on taking a life, but on the makeup of the man, selection,
training, mission preparation and all that goes along with that. The killing of a human being is a very small part, actually. I believe today we are seeing too many seeking their 15 minutes of fame and will do or say just about anything to make that happen. We are seeing a number of persons who misrepresent themselves and their roles, and that lends itself to misinformation and glamorization.

DB What would you say to the general public about the sniper profession? To
those aspiring to the position?

JM The skill sets that scout snipers possess represent the very best in the
American serviceman. These skills deliver disproportionate results on the
battlefield and are a true force multiplier. The enemy truly fears the sniper.

CW I would first ask yourself if you’re ready and willing to do whatever it
takes to get there. Being physically fit isn’t enough, and there’s a huge difference between being physically tough and mentally tough. You’ll endure incredible physical and mental hardships. You’ll be hot, cold, wet, dirty and hungry when no one else
is. You’ll be held to a higher standard, and be expected to do more with less. You’ll be expected to go farther, with heavier weight on your back. You’ll be expected to immerse yourself into dangerous situations with only a very small team to rely on. If you make it, the first time you lay hands on that rifle after you graduate will be a
moment you’ll never forget.

TD Snipers are the calm professionals of the infantry. We are the ones out there making quiet, calculated decisions on the battlefield. To the aspiring I would
say, this isn’t going to be an easy or quick process, so if you really want to be a sniper, just keep with it and know that you will be tested.

DB Anything else to say to our readers?

JM There have been many controversial incidents relating to Marine scout
snipers of late, but the vast majority of activities have been in support of combat operations in a far away country to defend this great nation.

CW Snipers are not mindless, murderous killers. Snipers are selected and trained based upon not only physical strength and aptitude, but on their ability to make sound decisions while immersed in highly stressful scenarios.