SEAL 1 introduces its New Muzzleloader Line at the Shot Show. 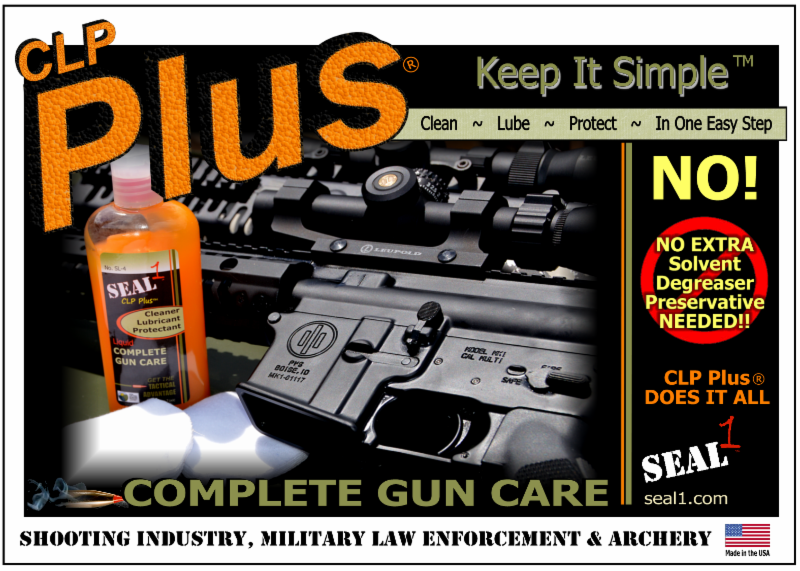 SEAL 1 Muzzleloader CLP PLUS is the next generation of products that will clean, lube and protect your muzzleloader.

The paste works as a great patch and bullet lube.

It is time to go to the next step use SEAL 1 Muzzleloader CLP PLUS for all your muzzleloading needs. 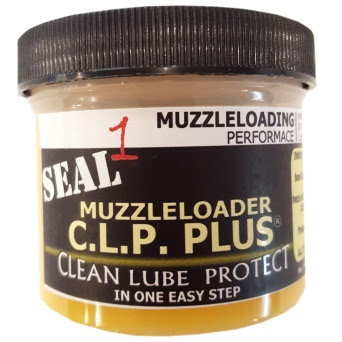 [su_dropcap style=”flat” size=”5″]B[/su_dropcap]ullet lube in a black powder cartridge can function in two ways. On grease-groove bullets, it helps keep the bullet from rubbing the gun’s bore to reduce the chance of leading. In a load with a paper-patched bullet, it coats the bore with lube to help prevent hard powder fouling from being too hard or stiff.

To expand on the history of paper-patch bullet shooting just a bit, in the mid-1870s, international teams competed in the Creedmoor matches, probably the most famous longdistance shooting events up to that time. There, paper-patch bullets were the normal projectiles used and they were used without any lubrication.

In that era, hunters used tallow or wax lubricating “cookies” underneath the paper-patched bullets, so the hunter’s riﬂe barrel didn’t require cleaning as often. But at the Creedmoor matches, shooters cleaned their barrels after every shot.
WHILE GREASE-GROOVE BULLETS and paper-patch bullets are lubed in different ways, they still can use the same kinds of lubes. And although these have very slightly different actions by either lubing for the shot being ﬁred or for the next shot, they still perform the same duty (to keep the black powder fouling soft).

Black powder cartridge lube actually does the same thing as lubes for muzzleloading arms too, but the recipe for such lubes is different. That difference relates to the way it is loaded, and the higher pressures found in black powder cartridges when compared to muzzleloaders, so “stiffer” lubes are more often used. And, just like the difference between grease-groove bullets and paper-patched bullets, the reason for lubrication while shooting muzzleloaders is still the same, to keep the fouling soft for following shots.

For black powder cartridge shooters today, we almost always use lube with the bullets in our loads. That can be said as “always” with grease-groove bullets and “usually” with paperpatch bullets. One area where I’ll use paper-patch bullets without lubrication is while breaking in a new barrel. I’ll load 20 rounds with paperpatched bullets and no lubrication, ﬁring those bullets while cleaning the bore after every shot. Those dry paper patches might have a slight bit of abrasiveness to them, and if so, they’ll add a ﬁnal bit of polish to that new barrel’s bore. In loads for my general shooting, both for target and hunting loads, I use lubricants in all of my black powder cartridges.

There are several good lubricants on the market for black powder cartridges and, although they are not all alike, they are all good. The one that is the “best” for you will depend on a variety of factors, including the likely weather conditions in your area, the caliber and the amount of powder used in your loads. I can’t specify here what is best for your shooting. As with many other aspects of our sport, each shooter needs to determine what is best for them, and quite likely for each black powder cartridge riﬂe used.
I WILL OFFER ADVICE, however, on what to look for in your own riﬂe(s) to help you choose which lube to use. For instance, if you do not ﬁnd a “lube star” on your riﬂe’s muzzle after shooting, the lube is either too soft or, as with paper-patch bullets, you didn’t use enough lube.

The lube star is simply excess lube that forms the star on the gun’s muzzle, shaped by the lands and grooves of the barrel. That is excess, yes, but without it you simply don’t have enough.

This group was shot with the .50-70 Sharps with Vigilante Lube on the bullets.

Lubrication in black powder cartridge loads is one area where we can generally say that too much lube is plenty. I would rather see a generous lube star at the muzzle than a light one. That’s just a guarantee showing how more than enough lube is being used.

The different black powder cartridge lubes I have used could make an interesting list. They include Lyman’s Black Powder Gold (a “stiffer” lube designed for long-range shooting), SPG, BPC from C. Sharps Arms, DGL (Damn Good Lube), and, more recently, a new one called Vigilante Bullet Lube. All of these are good, but some are better than others in speciﬁc circumstances, and I must admit that I have not kept the notes required to make authoritative statements about which is best in what calibers during which kind of weather.

However, I know shooters who use one kind of lube such as SPG during the summer, but switch to the slightly softer DGL for winter.

As I mentioned, the new kid on the black powder cartridge lube block is Vigilante Bullet Lube. The owner of the company, Dan Highley, introduced his new lube to me while I was cruising traders row with Allen Cunniff at the last Quigley Long Range Buffalo Riﬂe match. We each received a tub of it, and I started giving it a workout shortly after returning home. That activity began with a wide list of black powder cartridges, from the .44-40 up to the .50-90. Somewhere in the middle was the .44-77, and that is the cartridge that has given me the most experience, so far.

VIGILANTE BULLET LUBE is for paper or metallic cartridges. I don’t personally know any shooters who are using paper cartridges these days, although I could probably ﬁnd some who are shooting Sharps percussion riﬂes where they could be used. In those percussion breechloaders, such as the Model 1863 Sharps, the bullets still need lubrication with or without the paper cartridge. I own an 1863 percussion breechloader, and when I get around to using it, I’ll be sure to have some Vigilante lube on hand.

First, the .44-40; my loads used the standard bullet for the .44-40, Lyman’s #427098, over 34 grains by weight of Olde Eynsford 2F with no wad between the bullet and the powder. Those bullets were lubed with Vigilante and sized to .429 inches before being ﬁred in my new Model 1885 Low Wall from C. Sharps Arms. That load worked very well, giving tight groups at 50 yards, complete with a ﬁne lube star on the riﬂe’s muzzle. No leading or evidence thereof could be found during cleaning.

The .44-77 used both “naked” and paper-patched bullets. The paper-patched 400-grain bullets were loaded over 75 grains by weight of the Olde Eynsford 1 1/2F with a Walters’ .060-inch wad, plus a 3/16-inch grease cookie of Vigilante under the bullet. Those were ﬁred in two ﬁve-shot groups, back to back with no cleaning. The last couple of cartridges began to feel “sticky” when they were chambered but not stiff, and all ten shots scored nicely.

When I cleaned my Remington rolling block riﬂe, it was obvious that the bore was still coated with a layer of Vigilante and, again, no evidence of any leading at all.

Vigilante Bullet Lube is intended for use in black powder cartridges.

Now before any (or all) of you remind me, let me quickly point out that all of my shooting with Vigilante Bullet Lube was done during the summer, and it was a rather hot one at that.

That’s when I learned that Vigilante Bullet Lube is available as Lube #1 and Lube #2, with #2 being a somewhat softer lube designed for use in cold weather. I’d say that covers all of the bases.