The Following is Straight up from Army Times.

The president will award the Medal of Honor on June 25 to a soldier who fought through a nest of insurgents during the second Battle of Fallujah in 2004, the White House officially announced Monday.
Then-Staff Sgt. David G. Bellavia originally received the Silver Star for his actions, but his citation was revisited as part of a review of valor awards and determined worthy of the nation’s highest combat award.

The award will give Bellavia one of now seven Operation Iraqi Freedom Medals of Honor, and make him the only living recipient from the Iraq War.
During the battle, Bellavia single-handedly killed multiple insurgents, including one during hand-to-hand combat.
A squad leader at the time, Bellavia, now 43, was clearing a block of buildings when his platoon was pinned down on Nov. 10, 2004, in Fallujah, Iraq.
The first nine buildings were found to be unoccupied, but were filled with rockets, grenade launchers and other weapons. When Bellavia and four others entered the 10th building, they came under fire from insurgents in the house, according to his Silver Star citation.

The ensuing gun battle injured several soldiers. Bellavia switched out his M16 rifle for an M249 SAW gun and entered one room where the insurgents were located to spray it with gunfire, forcing the Jihadists to take cover and allowing the squad to move out into the street.

Other insurgents on the rooftop of the building began firing on his squad below, forcing them to seek cover in a nearby building. Bellavia then went back to the street and called in a Bradley Fighting Vehicle to shell the houses before re-entering the building to assess the scene.
Upon entering, Bellavia gunned down one insurgent who was loading an RPG launcher. A second enemy fighter began firing as he ran toward the kitchen and Bellavia fired back, wounding him in the shoulder. A third insurgent then began yelling from the second floor. 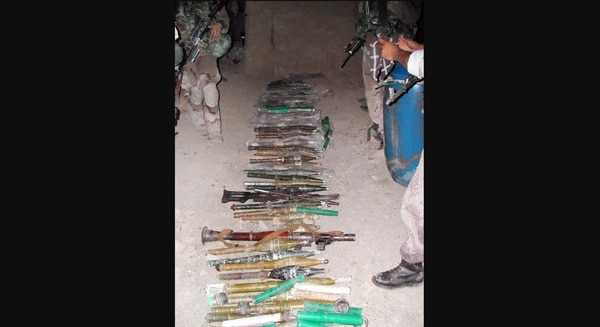 Cache of weapons confiscated in Fallujah by Staff Sgt. David Bellavia and his unit. (Army)

Bellavia then entered the uncleared master bedroom and emptied gunfire into all the corners, at which point the wounded insurgent entered the room, yelling and firing his weapon, the citation reads. Bellavia fired back, killing the man. Bellavia was then shot at by another insurgent upstairs and the staff sergeant returned the fire, killing him as well.

“At that point, a Jihadist hiding in a wardrobe in a bedroom jumped out, firing wildly around the room and knocking over the wardrobe. As the man leaped over the bed he tripped and Sergeant Bellavia shot him several times, wounding but not killing him,” the citation reads. “Another insurgent was yelling from upstairs, and the wounded Jihadist escaped the bedroom and ran upstairs. Sergeant Bellavia pursued, but slipped on the blood-soaked stairs.”

Bellavia followed the bloody tracks of the insurgent up the stairs to a room on his left. Hearing the wounded insurgent inside, he threw a fragmentary grenade into the room, which caused the insurgent to flee to the roof. Two more insurgents began yelling from the third story of the building.

Bellavia grabbed the wounded insurgent and put him in a choke hold to keep him from giving away their position.

“The wounded Jihadist then bit Sergeant Bellavia on the arm and smacked him in the face with the butt of his AK-47. In the wild scuffle that followed, Sergeant Bellavia took out his knife and slit the Jihadist’s throat,” the Silver Star citation reads. “Two other insurgents who were trying to come to their comrade’s rescue, fired at Bellavia, but he had slipped out of the room, which was now full of smoke and fire.”

A final insurgent dropped from the third story to the second-story roof. Bellavia saw the fleeing man and fired at him, hitting him in the back and the legs and causing him to fall off the roof and die.

By this point, five members of the platoon had entered the house and took control of the first floor. Before they would finish off the remaining insurgent fighters, however, they were ordered to move out of the area because close air support had been called in by a nearby unit.

The White House release said that Bellavia’s actions that day rescued an entire squad, cleared an insurgent strongpoint, and saved many members of his platoon from possible death.

Bellavia originally enlisted in the Army in 1999 and served in Kosovo, before deploying to Iraq in 2004 with Company A, Task Force 2-2, 1st Infantry Division. After leaving the service on Aug. 16, 2005, he has engaged in New York state politics and continued to serve the military and veteran communities through various advocacy groups.

Bellavia now has his own daily radio talk show for WBEN in Buffalo.